Just added to your cart

I ordered the three fader version of the sparrow for writing dynamics as I compose some simple string parts. It’s awesome! Best purchase I’ve made in a while.

Love the feel of my new Sparrow 4x100mm Midi Controller! Very durable, nice long sliders and nice feel to the sliders…loving it so far!

I came really, really close to not canceling my order for another brand of controller that was $374, probably the same one a lot of other people are talking about, that has the dial, faders, and knobs and you can magnetically snap the modules together!!! I'll be honest... I really needed the money for something else, so I canceled three days before it was going to ship. I believe it was that same night that I stumbled on The MIDI Maker on Etsy of all places. I couldn't believe my eyes and was even more shocked when I saw the prices! For $90 I got the exact thing I needed with no extra fluff or features that I don't need. This is absolutely perfect for what I wanted and it looks great too! I got the red one to give some contrast to my black desk, black monitors, black keyboard with, of course black and white keys... you get the idea... I wanted something bright to cheer things up a bit. What I really want for a desk is an ambrosia maple table, but they're so expensive, but I digress.

This was actually, literally an answered prayer because I had been looking pretty intensely on forums, blogs, google searches etc. I think I must have looked at pretty much literally almost everything available. None of the big commercial sites carry anything basic like The MIDI Maker's controllers. If they did they would make a killing! Another controller I found was very similar but it wasn't completely enclosed, so I nixed that as an option. One from a guy in France was pretty cool with real solid hard wood case, but was pretty expensive at $300 for just three faders.

It's so easy to use too! It's a minor annoyance of having to exit out of software, and disconnect MIDI devices, to be able to change the settings, but once they're set, you probably won't have to change them often. I did notice however that Studio One uses CC 1 for volume, whereas Dorico uses CC 7, so I do have to change the settings when I switch between the two apps. But I've pretty much decided I'm only going to use it with Studio One Pro and stick with notation for dynamics in Dorico which to me just makes more sense. But it was nice to see that it works with both apps.

Not sure why it took me so long to find The MIDI Maker, but I'm glad I did... save me from an untimely purchase that would have been way expensive!

Well constructed, fader action is stable for the most part but there is some minor give and take and I would characterize it as a slight wobble. But I didn't expect perfection for $90 for a three fader Controller.

If been looking for something this that isn’t insanely overpriced. This unit is amazing. Arrived fast. Super fast set up and works flawlessly!

I’d been searching for a plain straight forward fader Controller, it took quite awhile until I came across The Sparrow, it was exactly what I’ve been searching for, and once I learned how to map it to my orchestral library, it’s simply sublime. Great faders, and Jeff, who is so helpful, what more could I ask for. Initially, I had a problem locating the CC parameters of my orchestral library, but once I found it, everything fell into place.
Thanks Jeff, Great product, and great support, wonderful!!’n

Just what I was looking for. Integrated nicely with Reaper and associated NI and Spitfire Orchestral Libraries. Great 100mm faders. Support there to hold me hand during some initial configuration instructions I needed.

I'm sure you've all seen the YouTube videos. Composers, product specialists, content creators all raving about this nifty little midi control surface that's the latest greatest piece of gear that we all need to own. I must confess that I did end up ordering one but was told that I may not get my order until May. It was then that the practical and frugal side of me came to my senses. $400 +/- for 3 faders and some buttons? Add another $100 for a dial? As our current Prez would say, "Come on Man!" I admit they look good but couldn't I find a better solution? That's when I stumbled or found my way to "The Midi Maker" website and found the "Sparrow". I placed an order for the 3 fader controller and got it within a week. I absolutely love it and plan to place another order for the 8 fader controller once I settle down into my new studio space. 100mm faders that feel great and more importantly a proprietor that's open to doing custom projects/designs. Best of all he's in the USA so we don't have to worry about customs, etc. So if you're going back and forth and worried about quality I can assure you that this product is great. I hope that we as a community of creatives will do everything we can do get the word out and tell everyone of the Sparrow.

Great quality faders, great build. Exactly what I need for automating strings. I applaud this seller and creator

An amazing product, smooth operation, feel, and precision. Can't wait to see what's in store for 2022.

Fantastic product... the simple midi controller (for music production) I was looking for! Thank you!

What an incredible piece of equipment, not to mention the craftsmanship put into it. I was having such a hard time trying to find the simplest of needs, a fader. So happy I came across this shop. Plug in and works straight away. 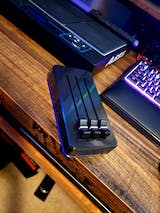 Great construction and stylish too. Good and friendly communication as well! As another reviewer mentioned, if you hit up Jeff with specific cc assignments, he can program them for you so the controller is ready to go once you get it. This is a great controller for anyone looking to add life and motion and depth to orchestra samples. The long faders feel solid and are much easier to work than the tiny ones you find on other controllers.

Great quality controller. Bought it to help with my kontakt orchestration libraries. Very pleased with it. I highly recommend it. 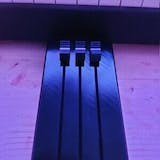 Great item. Nice smooth travel on the sliders. Exactly what I was looking for and much cheaper than the other, mass-produced alternatives. Jeff was also very responsive and accommodating. Great product, great seller.

V
Sparrow 3x100mm MIDI controller Vladimir Huels
I just waisted my time and money as the it...

I just waisted my time and money as the item did not worked for me.

Cool product - everything I expected!

awesome! love that its 3d printed

J
Black Sparrow 4x100mm MIDI controller Jason Raynor La Torre
This was exactly what I was looking for. I...

This was exactly what I was looking for. I didn't need a large fader bank or big honking devices with all sorts of bells and whistles, I just needed a few simple faders to work with my main CC controllers I use and this did the trick. The faders move smoothly, the 3d print is well made and it was simple to synch with my DAW. They don't look half bad either. I don't necessarily need LED flashy lights every where, just something compact that fits in my work area and does the job, and this definitely fits the bill! 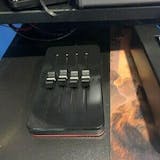 D
Sparrow 3x100mm MIDI controller David Metz
Perfect for what I need. Does the job and...

Perfect for what I need. Does the job and does it well! 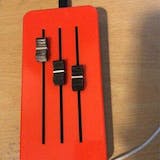